The Biosensors and Biotechnology Laboratory at Universiti Brunei Darussalam (UBD) have recently had some notable success in their research. They published a research paper discussing a novel detection method for porcine and bacteria using luminescent dyes in the Biosensors and Bioelectronics Journal (Impact Factor 7.4), and have also recently been awarded a United States Patent for the invention of a novel electrochemical DNA biosensor using graphene biochip for species identification.

The research paper was authored by PhD student, Sharmili Roy, under the supervision of Principal Investigator Dr Minhaz Uddin Ahmed of the Faculty of Science, UBD. The study showcased a new highly sensitive strategy for the detection of sequence-specific DNA from different meat species at as low as pictogram levels. Using this technique, target DNA of Sus scrofa (porcine) meat was detected at as low as 1 pg/mL for the first time. This can be useful for consumer protection as there has been increasing concerns for porcine adulteration in meat products in terms of the food industry's compliance with religious codes. Certain religions, such as Islam and Judaism, restrict any consumption of pork. The paper can be accessed via doi:10.1016/j.bios.2016.06.065 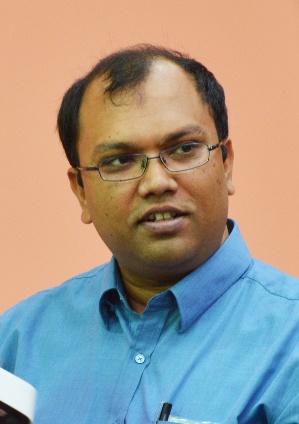 The United States patent awarded to UBD, was invented by PhD student Sharmili Roy, Dr Ibrahim Abdul Rahman and Dr Minhaz Uddin Ahmed. The patent numbered as US 2016/0177387 A1 and was filed on 14th December 2014 and published on 23rd June 2016. Similar to the work published in the Biosensors and Bioelectronics Journal, this new detection method is able to identify different meat species, but based on the isothermal amplification of target genes followed by electrochemical detection. This electrochemical biosensor can be used for rapid detection and identification of different meat species in food sources. Previous methods are too time consuming and the techniques in this study exhibit improved efficiency.

Screenshot of the published patent

Dr Minhaz Uddin Ahmed has also been involved in editing a book, titled Food Biosensors, to be published by the Royal Society of Chemistry (UK). Together with co-editors Mohammed Zourob (Cranfield University, UK) and Eiichi Tamiya (Osaka University, Japan), the book features contributions by leading researchers from around the world. The planned release date of Food Biosensors is September 2016 and can be pre-ordered from Amazon, Royal Society of Chemistry, Books A Million and Indigo. 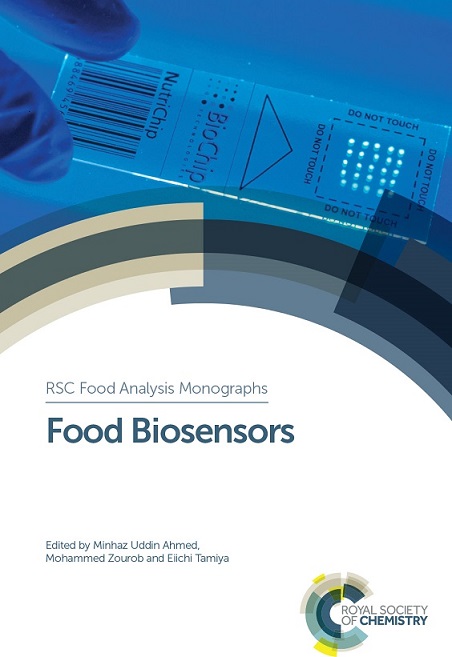 Food Biosensors, the book features contributions by leading researchers from around the world

Endorsed by the Royal Society of Chemistry and part of the Food Chemistry, Function and Analysis series of reference books, Food Biosensors features the latest development of biosensor detection methods in a single resource, featuring a specific focus in each chapter. Topics covered include cutting-edge miniaturised devices as innovative tools for food biosensing, nanomaterial-based electrochemical biosensors for detection of foodborne pathogens and their opportunities for future commercialisation. Food Biosensors provides a thorough review of proven, developing fields of food analysis and will be an excellent resource for food biotechnologists, food chemists and biosensor related students and researchers.

With growing concerns for public health and safety in the food industry, the application of biosensors to detect potential harm such as genetically modified organisms, toxins, allergens, hormones, microorganisms, species-specificity, pesticides, insecticides and related components are now at the forefront of scientific advancements. These elements can be detected through their biochemical or biophysical changes on sensor surfaces using single or multiple transduction mechanisms. Compared to conventional techniques, biosensors offer better efficiency, reliability and versatility for analyte detection.