Three current and former members of UBD’s Faculty of Science (see photos (A) and (B) below) contributed to a study recently highlighted by Biotropica, a journal focusing on tropical ecology and conservation. Dr. Linda Lim and Dr. Chan Chin Mei (UBD Chemistry Programme) identified pH-indicating chemical products filling the hypertrophied mandibular gland reservoirs of Brunei’s mysterious “exploding ants”. Rather than being confined to the worker ant’s head (as usual in ants), glandular reservoirs extend through the worker thorax and abdomen. Across more than a dozen species in this ant group, product colors range from brilliant white to yellow, orange and red with increasing pH, making these Colobopsis species literally ‘litmus paper with legs’. Species-specific product pH values are thought to perhaps influence ant associations with microbes.


Common in the rainforest canopy at the Kuala Belalong Field Studies Centre, these ants graze microbial biofilms on leaves and other plant surfaces. A subset of the Colobopsis species, as shown in photo (C), defend their foraging territories suicidally against intruding ants which might contaminate the foraging grounds. A territorial Colobopsis worker instantaneously grasps an invader’s leg, wraps its body around the intruder (see photo (D) below), and exudes sticky mandibular gland product through anterior ducts at the edges of mandibles (mouth parts). Simultaneously, it explodes the glandular reservoirs through its abdominal wall onto the opponent’s back. Glued to its attacker, the targeted ant tumbles to the ground and dies. Because only highly evolved Colobopsis species use mandibular gland products in this way, the article’s authors suggest that the chemicals evolved initially for some other role, likely in processing of microbial

Each issue of Biotropica highlights a single (“Editor’s Choice”) article to both attract readership and promote the paper’s contents to other, e.g., science news, publications. Both the unusual behaviors of these ants and their potentially novel roles in the forest ecosystem contributed to the Editor’s decision in this case. Although voluntary selfsacrifice is known to occur in other social insects, the behavior of exploding Colobopsis is unique in occurring on distant foraging territories, rather than in defense of queen, brood and nest site. Further, if as hypothesized, these ants alter microbial abundances on plant surfaces, this would represent a novel type of ant-plant interaction. Deterrence of herbivorous consumers (mainly insects) by ants is well-documented in tropical forests, but interactions of ants with pathogenic and beneficial microbes might be even more important in ever-wet equatorial forests like that in Brunei Darussalam. 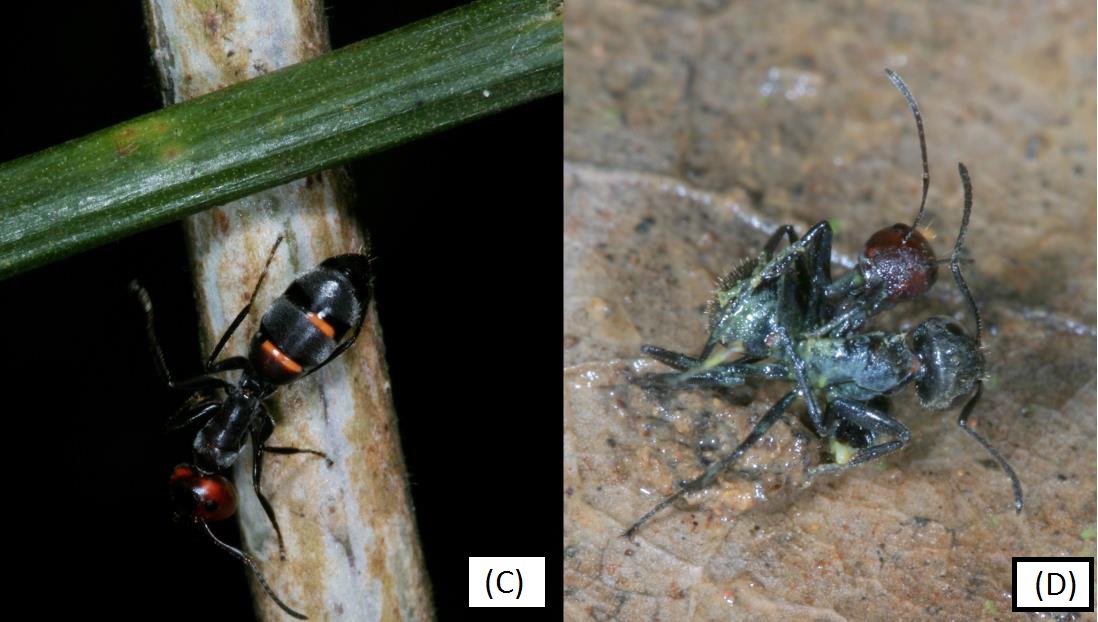 (C) Colobopsis ants from KBFSC: (L) Orange mandibular gland product visible through intersegmental membrane of abdomen and through integument in worker’s posterior head; (R) A Colobopsis species with yellow product has sacrificed itself in conflict with an intruder from a species with white product. (D) A Colobopsis species with white product has grasped the antenna of a weaver ant (Oecophylla smaragdina) and exploded contents of its mandibular gland reservoirs on the opponent’s face.