FOS Scientists find a fix for a frog’s worst nightmare


The editor of the Journal Biotropica and the science news platform Mongabay recently highlighted research conducted in the Environmental Life Sciences Program, UBD. The study compared amphibian biodiversity in oil palm plantations and logged forest, with that in primary forests. Below is a personal account of what motivated the authors to conduct this research and report on their major findings.


Travelling through Borneo on land or flying over it one can come across a great variety of forest types: lush pristine forests, secondary logged forests and vast areas of oil palm plantation. Increasingly, forests are being converted to plantations. If this continues unabated, almost three quarters of the current forest is expected to disappear by 2100. In the Malaysian state of Sabah between 10-20% of all the land has already been covered to oil palm plantations with dramatic consequences for biodiversity. 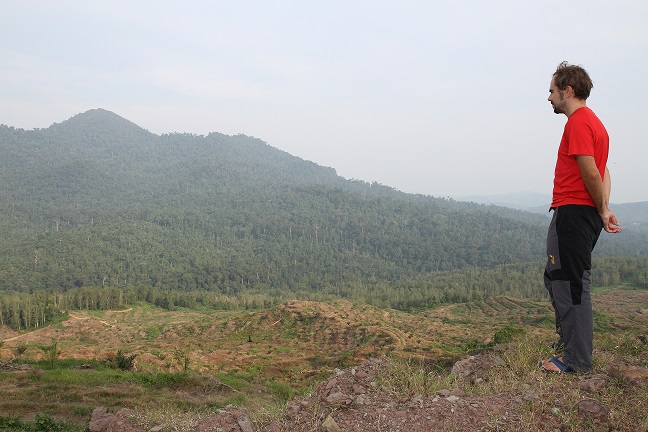 As conservation biologists and herpetologists one cannot look away from this impending disaster. Southeast Asia is one of the World’s most important biodiversity hotspots with Borneo, the World’s third largest island, considered to be the source of many radiations in the region and harbouring a vast amount of endemic species. Worldwide, amphibians are the most threatened vertebrate group. In Borneo, the threats to amphibians stems mostly from deforestation.

Having worked for many years in the pristine forests of Brunei Darussalam, we had learned to appreciate the central role that amphibians play in the forest food chain. Could secondary forests play a role in preserving primary forest species? Would any amphibians survive in palm oil plantations? Which primary forest species are lost when forests are converted? We had to find out. When we heard about the Stability of Altered Ecosystem (SAFE) Project in Sabah, Malaysia we knew that this was a grand opportunity to try and get answers to these questions and maybe make a contribution to advising on how to design the oil palm plantation agroecosystem to minimize biodiversity loss. 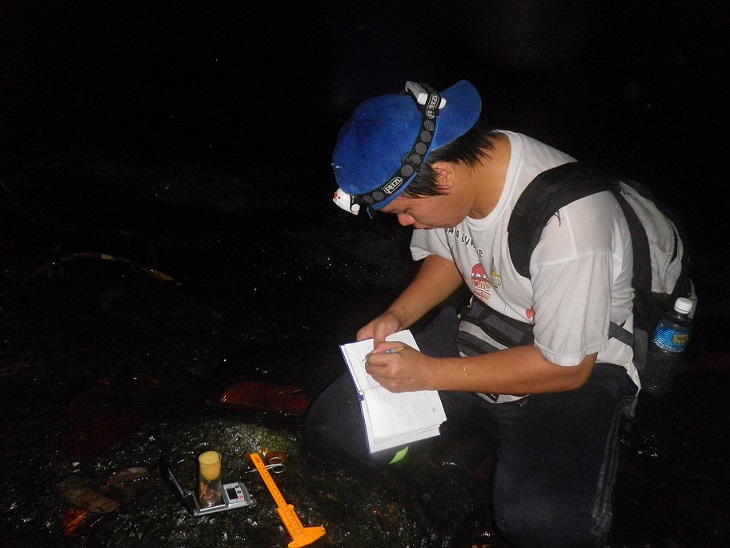 Working within one of the World’s largest ecosystem projects was a challenge because we had to visit numerous remote streams within the 7200 ha study area to survey frogs at night. During our first field season we had to drive on abandoned logging roads, crossing unstable bridges only to walk for another 1-2 hours clambering up slippery boulders in torrential streams to reach our study plots. Dodging aggressive wild elephants at night complicated our work. But we were rewarded with sightings of a King Cobra, the elusive Bear Cat and Orang-utans.


As frog biologists, we were interested in measuring the changes in species richness along the gradient of forest modification. We found that frog species richness declined with loss of canopy cover from primary forest to logged forest to plantation. Somewhat surprisingly, the logged secondary forest suffered only minor losses of original species and showed only small shifts in community composition. Thus, Bornean stream-associated frogs appear to be resistant to logging as long as the riparian forest remains more or less intact. In oil palm plantations we found a dramatic decline in number of species with only, on average, 49% of the primary forest species remaining. Worst were young plantations with very low canopy cover. They retained only 2% of the possible regional primary forest frog species.


From our study we have learned two important things. First, secondary selectively-logged forests still have high value and should not be disregarded when it comes to biodiversity conservation. Secondary forests are also playing an increasing role in connecting primary forests allowing animals to move between such forest fragments. Second, oil palm plantations are a primary forest frog’s nightmare. However, older plantations, or those with good riparian stream canopy cover can provide the natural habitat of many primary frog species. The creation or retention of riparian forest reserves can thus play a major role in mitigating the loss of frog species richness in oil palm plantations. 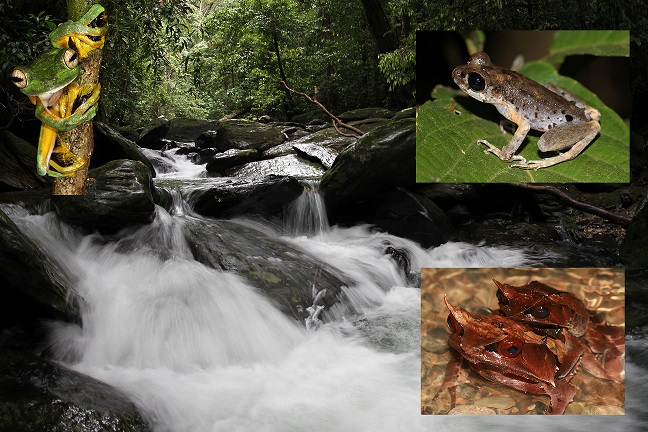 Our study only lasted three years and thus we cannot say how much further diversity will decline or how rapid the meltdown will be in logged forests and plantations. The next few years will tell.

Flying over Borneo today we realize that not all is lost. The message that is emerging is that there are threats but also opportunities with respect to biodiversity conservation of frogs in secondary forests and that riparian forests can mitigate some of the impacts found in oil palm plantations.