Article and photos by: Aishah Sharif


More than 50 students and Lecturers attended and participated in the session, held in the Central Lecture Theatre (CLT) G.12 of UBD. The  one day event started off with a fruitful discussion among the attendees and the BSP scientists. This was followed by an introductory talk on what Geologists do at BSP and around the world. Students had the chance to discuss  with the BSP scientists regarding their experiences as Geologists and what to expect in the future for a career in Geology in the oil and gas industry.


Later in the afternoon, the students were presented a talk on the history and geology of Seria oil field. Among the students attended, were second year students who were learning “the Geology of Brunei and Surrounding Countries”, as part of their compulsory modules. This was an excellent seminar to complement what they currently study.


The BSP Geologists capped off the event with a field development exercise. Students were grouped into teams and put to the task by giving them real data from BSP to evaluate and interpret. Using their geological interpretation skills, teams must work together and find the most productive wells. All in all, the event was very beneficial and informative and the Geology Group look forward to more collaborations to come in the future. The session was thoroughly a unique opportunity for students to interact with people who are working for the industry. Steven and Fauzi, standing left and right, respectively, during the BSP seminar with the Geology UBD Students. 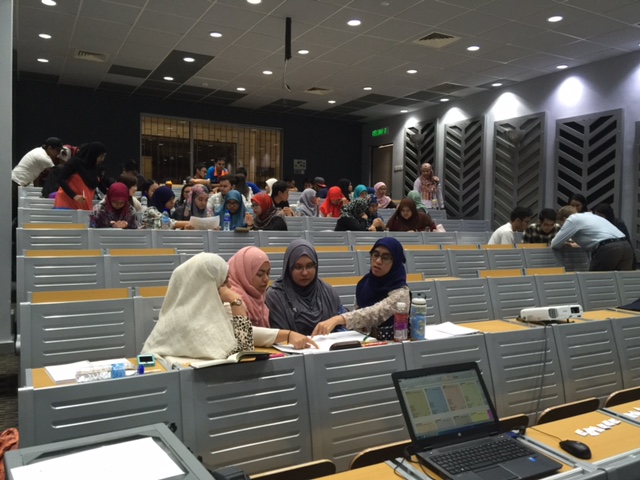 Part of the audience during the game that simulated the development of an oil well, guided by the BSP Geologists.