The 11th biennial conference organised by the Australasian Society for General Relativity and Gravitation (ASGRG) was hosted by the University of Tasmania, in Hobart, Australia, from 2 to 4 February 2022. FOS academic Dr Malcolm Anderson has been the Secretary of the ASGRG since 2002 and holds a position on the Scientific Organising Committee of the conference.

The original plan was to run ACGRG11 as a hybrid face-to-face/online meeting in the second week of December 2021, but in view of the travel restrictions then in place in Australia the SOC decided in early November to shift it to the following February. As luck would have it, the conference dates then coincided with the peak of the omicron surge in Australia, and in the end all sessions were exclusively online.

A total of 40 talks on current research in general relativity and cosmology were delivered at ACGRG11, of which 9 were invited talks, 15 were plenaries, and 16 were slotted into parallel sessions. The topics covered included the detection of gravitational waves (with 9 talks), cosmological models and the theory of black holes (5 talks each) and numerical relativity (4 talks). Dr Anderson presented the first plenary talk entitled “The distance-redshift relation in a perturbed EdS space-time” on the morning of Wednesday 2 February.

The conference also incorporated a public lecture by Roger Penrose on the evening of 2 February. Roger Penrose is a mathematical relativist who shared the 2020 Nobel Prize for Physics for his work on singularity theorems. His public lecture, titled “From black hole singularities to cyclic cosmology” was open to viewers from around the world.

An integral part of the closing session on the afternoon of 4 February was the award of the Kerr Prize for the best student talk at ACGRG11. The prize is named in honour of Roy Kerr, a New Zealand relativist who was the first person to solve the Einstein equations for a rotating black hole. The Kerr Prize was this time awarded jointly to Ben Grace of the Australian National University and Lucy Strang of the University of Melbourne for their talks, which were both on the detection of gravitational waves. 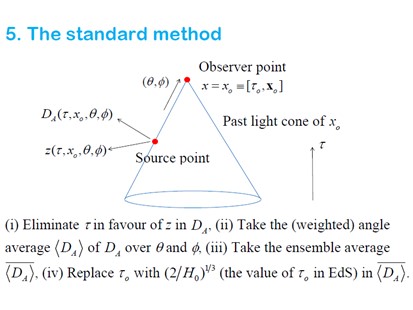 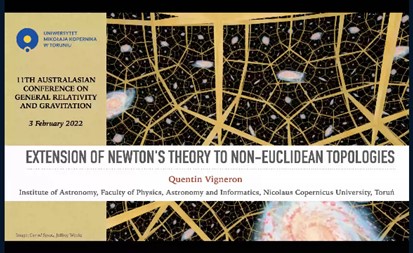 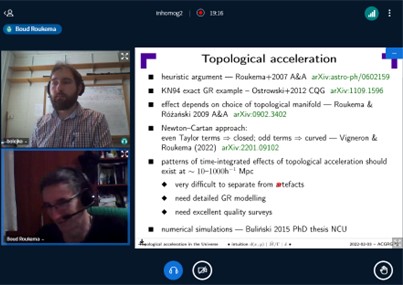 Screen captures from some of the presentations at the 11th Australasian Conference on General Relativity and Gravitation, including Dr Anderson’s plenary talk entitled “The distance-redshift relation in a perturbed EdS space-time” (top).