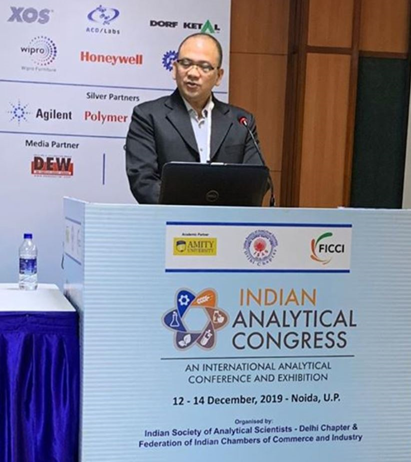 Associate Professor Dr Jose Hernandez Santos and his team at the Faculty of Science have developed an environmentally friendly method for estimating the antioxidant capacity of foods and beverages that does not require the use of chemical reagents. He was recently invited by the Indian Society of Analytical Scientists (ISAS) to present his team’s findings at the latest Indian Analytical Congress held in India.

Antioxidants are substances that are naturally present in many food products and plant-based beverages, including fruit juices and teas. These molecules serve as protecting agents for living tissues, preventing them from being damaged due to oxidative free-radical attacks. Well-known natural antioxidants include phenolics and polyphenols, flavonoids, and some vitamins such as ascorbic acid (vitamin C) and tocopherol (vitamin E).

Dr Santos’ PhD student, Kisan Koirala, has worked on the development of a Multi-Pulse Flow Injection Amperometry (MP-FIA) system that utilises a home-made electrochemical flow cell. The system enables rapid antioxidant analysis of common beverages such as teas, coffees, herbal infusions, and fruit juices consumed in Brunei Darussalam. The multi-pulse feature of the system can electrochemically clean the working electrode during the analysis, resulting in a high-throughput analytical method for estimating antioxidant capacity.